Tumor Me – A Second Time Around 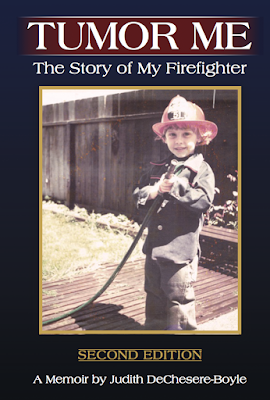 In 2014, I published a memoir about my son, Alex’s nine-year struggle with job-related brain cancer. He died on May 24, 2013 and I was determined to tell his story the best I could . . . and I did with love, my “gut”, and, yes, my emotions. I cried many times as I wrote and that was good for me because it permitted me to process my pain and sadness.
The first edition of Tumor Me, The Story Of My Firefighter was not perfect although it was proofread and edited by several people. And although I was satisfied with the result, after reading the book several more times, I knew I could do better. Over the course of the last six months, I did just that – rewrote it. Almost every page had a change or two – a word here, a passage there, an addition, or a deletion.
A few folks have asked me if rewriting the memoir was difficult because, in essence, I was reliving those years from Alex’s diagnosis, through the fight and ultimate decline, to the end. While tears fell more than a few times, the process of rewriting actually was quite comforting for I was able to relive our many and varied experiences one more time.
Brain cancer is an incredibly ugly disease; many dreadful moments spanned those long, nine years while Alex fought for his life . . . and I remember. Yet, through writing, and rewriting, I was able to re-experience the good times too . . . and there were many - when Alex and I talked for hours, sharing thoughts and feelings, or when we laughed heartily about myriad, random things that struck us as funny. As I actually wrote in the memoir, in an odd way I was lucky because I was allowed to be as close to my son during his last few years of life as any mother possibly could be. For that, I am forever thankful. Furthermore, as I rewrote my memoir, I was filled once again with deep gratitude for the countless instances of support from friends who cared.
The second edition of Tumor Me, The Story Of My Firefighter (2018) was made available on Amazon.com and on Kindle yesterday. I look forward to hearing how readers respond. The back cover text, that hopefully gives a potential reader insight, follows here:

In this book, the second edition of Tumor Me, The Story of My Firefighter, the saga has been honed, the details sharpened, and nuances surrounding the gritty struggle of a young firefighter’s nine-year battle with occupational brain cancer laid bare. Though this tale is one of trials, fears, unknowns, and desperation, it is countered by hope, determination, bravery, optimism, and humor - doses of laughter that tempered the tears.
And who was this man? He was Alex, my son, a CAL FIRE firefighter, a Fire Apparatus Engineer, a fire inspector, a fighter, a friend, and a confidant. He listened, he contributed, and he worked hard. He was responsible, trustworthy, respected, loved, and innately funny. Laughter was his sidekick and everyone knew it.
This memoir chronicles our experiences, Alex’s story, from beginning to end. The narrative is told from a mom’s perspective and every bit is true. 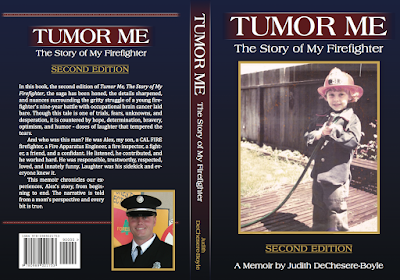 
Posted by Judith DeChesere-Boyle at 1:12 PM No comments:

What’s Going On?
And What Are We Going To Do About It?

Tragedies have highlighted 2017 for way too many people. The word rough is an understatement as we have witnessed or experienced hurricanes, earthquakes, tornados, floods, mudslides, and fires, fires, and more fires. Loss of life and property has been unprecedented. Natural disasters aside, what about all the random shootings, the killing of innocents by crazed killers? A quick Google search informed me that 2017 was the deadliest year ever with 307 mass shootings (four or more people shot or killed in a single incident) as of November 6, 2017. Most recent in our minds are the massacres at the First Baptist Church in Sutherland Springs, Texas and, of course, at the Mandalay Bay Casino in Las Vegas. Pure mayhem such as this leaves us speechless and numb.
I don’t mean to sound naïve. I know these events pale in comparison to skirmishes in wars that seem unending.

I began writing this blog about two weeks ago, but set it aside because it seemed too depressing. “Why write about all the bad things that have occurred recently?” I asked myself.
And then, this week, Valentine’s Day, February 14th, 2018 arrived. Who wasn’t shocked, saddened, and horrified by the shootings at Marjory Stoneman Douglas High School in Parkland, Florida? Seventeen lives were lost and at least fourteen more young people were injured. Actually that’s a misstatement. Many more people were injured, it not physically, they were hurt mentally and emotionally, perhaps scarred for life. It makes me sick.
I was an educator for 27+ years, mostly teaching high school. During that time our school had fire drills, earthquake drills, and, yes, even, a few code red drills toward the end of my teaching career. The latter had become a necessity that mirrored the stark incidents of violence that had inched their way into our daily lives. Throughout my time teaching high school kids, I can recall three incidents that involved a student possessing (or potentially having) a gun at school. I won’t go into detail, but those incidents were unnerving. I also recall being on lockdown when some loony was wielding a weapon at a nearby apartment development. Many of my kids were frightened, especially those who lived in the complex and had loved ones there. We were spared any major disturbance, but I remember feeling a definite responsibility for the students in my classroom. Though they may not have looked it, they were only children.
With that in mind, I cannot imagine the trauma endured by the educators and students in Parkland, Florida on February 14th, just days ago. It’s unfathomable to me. In my heart and mind, I have tried to imagine their pain. I know everybody and their brother will offer their thoughts and prayers and that’s all right, I guess, but it simply is not enough. We need action now. We must demand it of our Congress.
The Second Amendment of our United States Constitution reads as follows: "A well regulated Militia, being necessary to the security of a free State, the right of the people to keep and bear Arms, shall not be infringed." That being the case, however, I cannot believe our founding fathers foresaw deranged adults and teenagers with AR-15 automatic rifles mowing people down. I like to think our forefathers would be appalled by the senseless massacres that are occurring over and over and over. Let me be clear. I seriously support the second amendment but surely we need laws to prevent the purchase of military style weapons that end up in the hands of mentally ill people.
And let’s also be clear about this: This issue is not about mental illness (though that should be addressed as well) but about the need to limit the types of weapons that are not used for sport, are not needed for personal protection, but are made to fire rapidly for only one reason: to kill. It’s disgusting. We can do better.

An addendum:
I was wondering just who Marjory Stoneman Douglas was, so I googled River of Grass (1947) professing that the Everglades are a treasure, not a swamp.her. She was born on April 7, 1890 and died on May 14, 1998. She was an American journalist, a writer, a feminist, and an environmentalist. She is best known for her staunch defense of the Everglades against efforts to drain it and use the land for development. She wrote a book entitled
Marjory Stoneman Douglas must have been an outstanding individual. I have to imagine, though, that she would be devastated, like many of us are, by the slaughter that occurred at the modern, American high school that bears her name.