The Staircase To Somewhere

The piece below was simply writing practice, playing with words. I began with a name, Lucy Mac, and began writing. Below is what I wrote in the course of an hour or a bit more, simply because I needed to write. 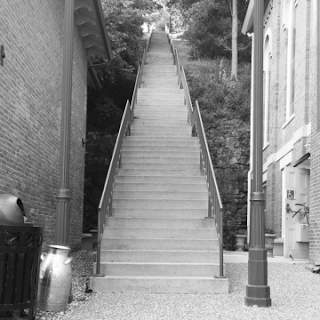 Lucy Mac came upon the staircase unexpectedly. She had been stumbling down the sidewalk of a narrow street in the heart of the city for what to her seemed hours. In actuality, however, it had been only minutes . . . twenty maybe, or fifteen. She was that lost in time.
Lucy had awakened stiff and cold, propped up like a sack of unwanted garbage in a shadowy, dank, narrow stairwell. She was woozy, she had drooled onto her chin, and she was wet between her legs. She was not certain why, but that discomfort had caught her attention in an instant . . . that, instead of the oozing gash on her neck, and the deep purple bruise that bloomed like a pool of dark ink beneath her left eye. With a shaky hand, she reached for a banister that she noticed anchored fortuitously to the wall of the entryway. Where was she? Glancing with blurry eyes from side to side, she concluded she must have been at the entrance of an apartment building, a tenement of some kind. It reeked of mold, of rotting fish, and of urine, both stale and fresh. Slowly she pulled herself to an upright position and then stood, swaying a bit from the effort. Where I am? And how did I get here?
With no recollection presenting itself, Lucy stepped cautiously down five, concrete steps to the sidewalk below. The street was nearly deserted with only two, young, hoodie-clad figures hurrying like thieves into the door of a corner deli. That meager establishment appeared to be the only offering of life in a place that was strangely silent and just beginning to lighten in the dawn. Lucy stepped forward, confused and unsure. I have to go somewhere. So she continued, step after step after step until, at last, she stopped dead. Ahead of her, she saw movement . . . suddenly lots of it as myriad individuals began spilling out of doorways and alleyways, out of garages and dim passages. Like lemmings, they filed onto the sidewalk and into the street. And with them came noises – the grunting, the coughing, the chatter of voices, both high and low; the rattling of metal, trash containers; the whirl of a small engine; the ratcheting of bicycle gears; a baby’s squeal, the yowl of a feral cat, and the yap of a mongrel yearning to be free. The cacophony of sound, the discord of the living, was both annoying and satisfying for it gave credence to Lucy’s very being.
She stood still for moments, looking and listening until her eyes blurred and her ears became stuffy, filled with too many stunning dissonances and harmonies to count. It was then that a sudden, cool wind wafted like a phantom from behind her, flipping strands of her hair across her cheeks and into her mouth. Startled, she glanced quickly behind her for a stalker, a fiend, but she was not being followed. Not anymore. And the breeze had heightened her senses. Lucy began walking again, and just as the space between her and the mass of humanity ahead had narrowed uncomfortably, she saw it . . . to her right. An empty stairway jutted upward for thirty, fifty, maybe one hundred steps to a roadway above. Not one soul was climbing up or coming down, not one, until Lucy took that first step up. Her eyes glommed onto the most distant step, her hand grasped the railing to her right and she began the ascent. She had no idea where this passage, these stairs upward, would take her but she was certain she was destined to go up, up and away from a nightmare she could not remember. Something awful surely must have happened but it was lost to Lucy, at least for now, perhaps gone forever, lodged deep, for now, in the recesses of her mind.