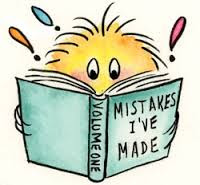 Mistakes. We’ve all made them. Some have been minor errors in judgment; others, well, others we wish we could take back and bury in the backyard.
“Seriously, what was I thinking?” one might ask.
I suppose the best a person can do is to take responsibility, to own up, and to vow never to do “it” again. Saying, “I’m sorry,” helps as well. It actually relieves the burden a bit.
Mistakes run the gamut from saying something unkind to someone to taking another’s life. A million different variances lie in between. We all know our blunders and likely could stack them in size from small to large without much effort. The point is not to judge, but simply to acknowledge. We are all human. Everyone makes mistakes. No one is perfect. Blah. Blah. Blah.
So why am I writing about this topic? I’ve been considering the difference between an honest mistake and a calculated mistake. Is the latter such a thing? I believe it is. Most of us have a conscience. We know right from wrong, and that is why our mistakes, our simple slip-ups, our gaffes, bother us so. Oh, man, I feel so bad about what I did! I wish I could take it back. I’m sorry I hurt your feelings. Please forgive me. Even grievous mistakes may fall into this category. As serious as an error may be, though, most of us are apt to have honest, heartfelt regrets.
In my opinion, however, people do exist in our world who have the inability or, more to the point, unwillingness, to stop themselves before they create a faux pas, or, even worse, a flat-out mistake. It is not in their make up to consider or to be concerned, in the least, that what has been said or done might be offensive or hurtful. Moreover, these folks have absolutely no remorse. It is difficult to understand how someone’s moral compass could go so awry. It is this part of the issue that confounds me the most.
I am assuming anyone who breathes is aware of the current election cycle. I, for one, am very tired of the name-calling and outright bullying that has taken place. None of the candidates is exempt, but one, in particular, is stuck in the muck, so to speak. He cannot stop himself from insulting others in regard to their looks, religious beliefs, ethnicity, political persuasion, disability, sexual preference, or gender, for that matter. And that bothers me.
I have a vivid memory, made more distinct in light of the video recently released of Mr. Trump’s comments about women. I grew up in a small town in Kentucky. I was sheltered, naïve, and shy. When I was a teenager, I can remember driving to the local Dairy Queen with a girlfriend. We were innocently minding our own business when a vehicle with two males, whom incidentally we did not know, drove by us.
“Pussy!” they yelled. “Pussy!”
I have never forgotten that moment. Never. Shouting that word was an unnecessary, unexpected, degrading, and vile attack and it has stayed with me all my life. I actually created a scene in my first novel, Big House Dreams, that is something of a reenactment of that moment. Perhaps, I thought, writing about it would ease the distress that the event engendered. It didn’t, but perhaps this bit of writing will. It may seem ridiculous that such an insult would persist, but it has. I am, by no means, a weak person - quite the contrary. But I do have feelings and a conscience. It is not surprising, then, that for over a year I have felt disgusted with the vitriol and vapid attacks on other human beings instigated by the Republican candidate for the presidency. I truly am shocked by it, but it is clear he does not care. He has made mistakes by design, intended errors in judgment, and insults that cannot or will not be retracted. That’s who this person is though and he will not change. Everybody says so, both his followers and those opposed to him.
I understand that a few voters detest both major party candidates; others have made a conscious choice already. Before casting a ballot, however, please consider carefully the character of the individual who will represent us, and our beloved country, for the next four years. Don't make a mistake. Consider our children. They are watching, listening, and are impressionable. They have vivid memories.

Posted by Judith DeChesere-Boyle at 2:38 PM No comments: Recently I heard the news. The CEO of Tesla Motors, Elon Musk, is backing the launching of a rocket to Mars. It will cost a passenger a mere $200,000. I’m not sure if that is a one-way ticket or not! I’ve been thinking about this from time to time for a few days, and at first, I couldn’t understand why such a story kept popping into my mind because, in my opinion, a rocket ride to Mars is more than a bit absurd. (Couldn’t that money be put to better use here on Earth?) Yet perhaps it’s not for me to judge. If folks want to go to Mars, they can have at it! Surely it would be the adventure of a lifetime. I actually could scrape the money together to go myself, but I’ll admit it. I’m not an adventure addict. I prefer to stick close to home. Maybe that’s a flaw in my character, but that’s simply the way it is.
Mars. The notion of zipping through space toward the red planet must make more than a few people quiver with anticipation. And, such a trip certainly would contribute to space exploration efforts, wouldn’t it? The scientific community, I’m sure, holds the view that such a venture would be worthwhile and if someone other than the United States government is paying for it, why not? Think about it - the planet, Mars. We haven’t conquered that space yet.
With Mars in the back of my mind, yesterday I braved the elements (our first paltry rain of the season) to go for a long walk with my husband and our two German Shepherds. For reasons I cannot articulate, on that dark and blustery day, I felt more tuned-in to our little planet than usual. The sky was charcoal, threatening, and stunningly beautiful. At intervals, light broke through and clouds swirled madly. Gorgeous. A few raindrops gently pelted my face. As we walked down the path beside Thompson Creek that is barely flowing now with only inches of water, I realized what a lovely place this is, only blocks from where I live. While the weeds and bushes close to the water were vibrant shades of green, the grass adjacent to the pathway was dead, a washed out taupe, a wasteland of foxtails, and yet somehow it was alive with a fresh layer of newly fallen leaves leaping in haphazard circles with the wind. We breathed in the musky smell of the earth - “petrichor” - a combination of dry earth and long awaited moisture. A magnificent, snowy egret flew in the air, its wingspan wide, just as we crossed the street that would take us to the next leg of our journey. A dog barked at us from behind a tall, redwood fence. Aw, I bet he would have loved to join us. A black and white cat scampered away when it eyed our four-legged friends, and squirrels, too many to count, darted up tree trunks and dashed down limbs, jumping nimbly to safety. I heard a metal wind chime tinkling a random melody in the breeze. I stopped to listen, and I smiled, content. We walked on, the dogs circling, smelling, and crossing leashes time and again. At last at a lawn area, they were set free to run. They sprinted through the wet grass, charging, gyrating, and encircling each other with pure joy. I loved watching them.
At last, when we hiked up our steep driveway to the front door, after walking a few miles, I felt refreshed, with a renewed spirit, and absolute affection for this place I call home. Earth isn’t so bad after all.
And Mars? Not for me, thank you very much. I’ll watch from a distance and let Mr. Musk and his party of adventurers take on that ambitious quest. Safe travels! 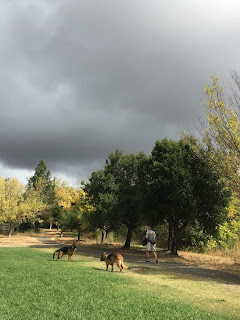 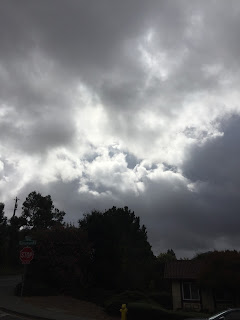 Posted by Judith DeChesere-Boyle at 3:34 PM No comments: